A GDF has to be built deep underground, in solid rock. The rock along with several other engineered barriers plays an important part in keeping people and the environment safe while the waste naturally becomes less radioactive. The Working Group has identified a Search Area in Allerdale that Radioactive Waste Management (RWM) could investigate as part of the Community Partnership.

RWM will study any proposed areas to see if a GDF could safely be built there.

No areas which fall within the Lake District National Park will be considered.

The working group has announced a Search Area, which is shown on the map below. You can find further information about the Search Area in the Latest news. 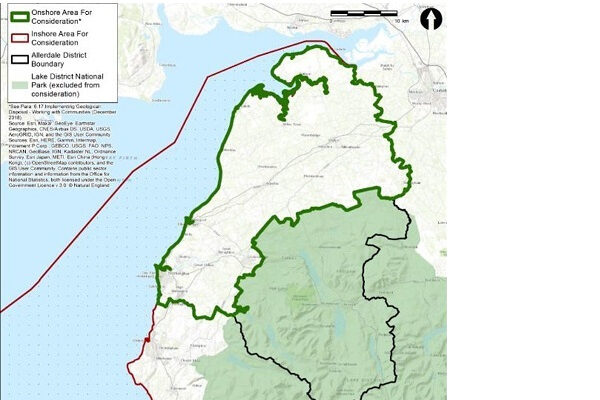 Discussions with RWM were initiated by an Interested Party in the Borough of Allerdale. As part of these initial discussions, RWM undertook evaluation work to understand whether the area identified by the Interested Party had the potential to host a GDF.

A Working Group subsequently formed in Allerdale as a result of the initial discussions with RWM and the initial evaluation work. An important task for Working Group was to identify a Search Area. The Search Area is the geographical area within which Radioactive Waste Management (RWM) would seek to identify potentially suitable sites to host a GDF.

The results of these evaluations are available below:

Allerdale is covered by Northern England subregions 3 and 5 in the National Geological Screening for a GDF study.