A Look Back: what the Allerdale GDF Working Group have been doing since launch

Since its launch in January, the Allerdale GDF Working Group has been starting conversations with the community around whether somewhere in Allerdale could be a suitable location for a Geological Disposal Facility (GDF) for higher activity radioactive waste.

The aim is to understand how people in Allerdale feel about possibly of hosting a GDF and to share information about what it could mean for the future of the local area.

While no potential site has yet been identified, the Working Group is already engaging with people across the community and has been gathering the views of local people through some initial focus group and telephone surveys.

As well as setting up a website, newsletter and social media channels to keep people informed, the Allerdale GDF Working Group launched a local Newspaper Advertising campaign and an interactive Virtual Exhibition which is still available online.

Over the last five months, members of the team have also been in close contact with the Office of Nuclear Regulation (ONR) and the Environment Agency to keep regulators fully informed, and delivered introductory presentations to Allerdale Borough Council, Britain’s Energy Coast Business Cluster (BECBC), Women in Nuclear (WiN) and Cumbria Association of Local Councils (CALC). They have also held their first Stakeholder Group meeting with representatives from a number of other local organisations.

Jocelyn Manners-Armstrong, Independent Chair of the Allerdale GDF Working Group, said: “This is the beginning of a long process, and I want people to get involved from the very start to help to steer our way. A GDF in Allerdale could be a major boost to the area’s future prosperity and the skill base of its workforce. However, as a borough of outstanding natural beauty, with valuable habitats and cultural heritage, it’s also essential that any potential development doesn’t impact upon the things that make Allerdale a special place. That’s why it’s so important that the people of Allerdale have access to information, can ask questions and raise their issues and concerns before any decisions are made”.

Anyone who would like to learn more about Geological Disposal and the Allerdale GDF Working Group, or share their views or concerns, is invited to attend any of the upcoming community engagement events, details of which will be announced soon. 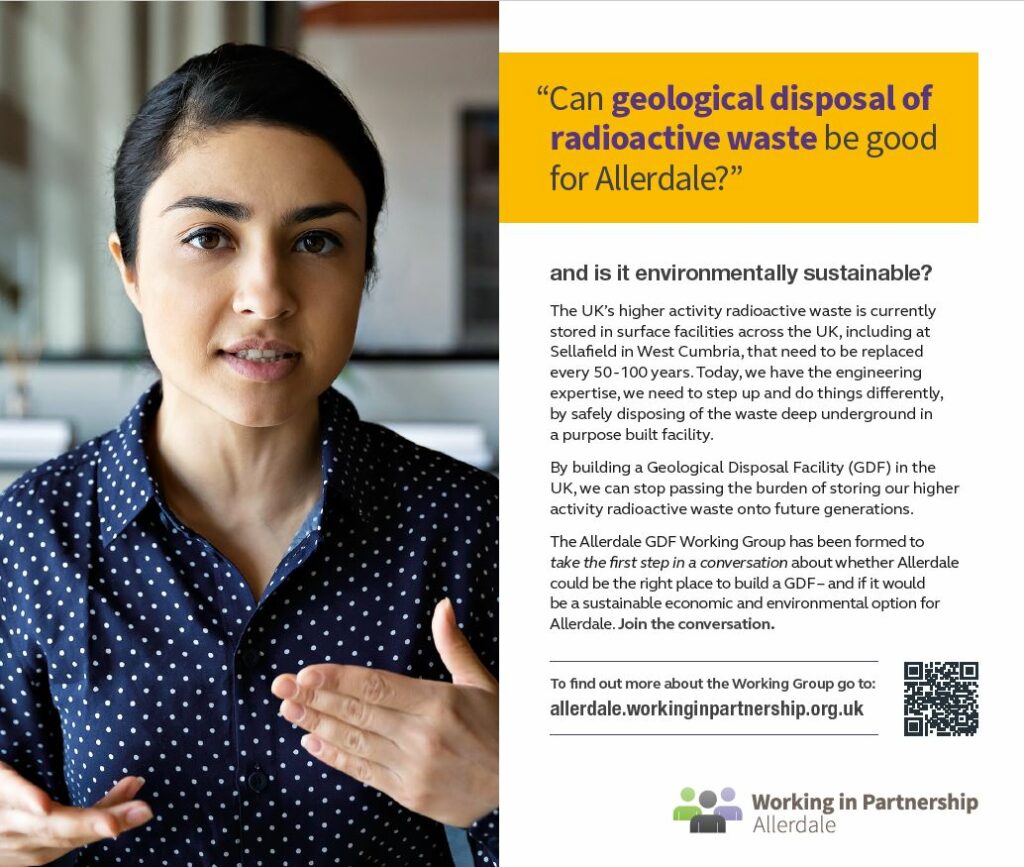 Allerdale GDF Working Group has held their first meeting with some of the communities key Stakeholders.

The meeting which took place online on 11th May was attended by Allerdale GDF Working Group members and representatives from Friends of The Lake District, CPRE (The Countryside Charity), Action with Communities in Cumbria (ACT), Cumbria Chamber of Commerce, Cumbria Trust, Inspira and the West Cumbria Sites Stakeholder Group. Representatives from Radioactive Waste Management (RWM) were also at the meeting to provide support and share knowledge.

Brought together for an update on the Allerdale GDF Working Group’s purpose and activities, the group heard about how the search area would be defined, the rights of the community and how they would be involved, and the possibilities for hosting a GDF offshore. There were also discussions around safety and the suitability of Allerdale’s geology and attendees were invited to ask questions and share their views.

These early discussions are only the starting point for engaging with local organisations and members of the community in Allerdale and a further meeting of the Stakeholder Group is due to be held on Tuesday 8th June where the conversation around Geological Disposal will be continued.

Any individual or organisation who would like to ask questions or share their thoughts with the Allerdale GDF Working Group in encouraged to contact them directly.

The Allerdale GDF Working Group is currently planning a programme of face-to-face community engagement events which will be held throughout Allerdale during July and August.

The events will provide an opportunity for members of the public to learn more about nuclear waste and geological disposal, speak to members of the Allerdale GDF Working Group team, ask questions and share views.

Dates and venues are yet to be confirmed but will advertised shortly and all events will be COVID secure and delivered in line with all applicable Government regulations.

Keep an eye on our Social Media channels and our Get Involved page.

In the meantime and if you haven’t already, you can visit our Virtual Exhibition.